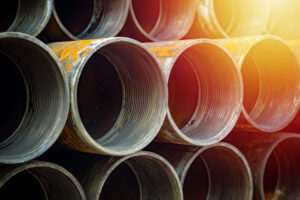 Most people don’t give their plumbing a second thought until there’s a problem. Plumbing problems don’t always start off small and harmless though. That’s why it’s important to be proactive where you can when it comes to your home’s plumbing system.

If you live in an older home, one thing you can do to prevent future plumbing issues is determine whether your pipes are galvanized and, if they are, replace them ASAP. Let’s go over what galvanized pipes are and the potential risks they pose to your home and family.

What are galvanized pipes?

What is the problem with galvanized pipes?

The issue with galvanized pipes is that the protective outer zinc coating does not prevent rust and corrosion from happening on the inside. Over time, this will lead to plumbing problems such as low water pressure, serious leaks, water damage, and blockages from buildup within the pipes.

Old galvanized pipes are also a potential health hazard to household members. As rust and debris from corrosion build up in the pipes, they can begin to contaminate your water supply. The zinc layer can also erode and release lead particles into your water. This puts everyone who uses the water at risk for lead poisoning and ingesting other harmful metals and minerals.

How do I know if my home has galvanized pipes?

If you suspect or discover that your plumbing system has been built with galvanized pipes, get in touch with Inland Empire Leak Detection. In addition to our free leak inspection services, we also specialize in repipe plumbing. We will replace your pipes in an expert and timely manner, so you don’t have to worry about dealing with any plumbing or health issues caused by old galvanized pipes now or in the future.

Contact us today to learn more about our free leak detection and repipe plumbing services in Riverside, CA!